Christmas In The Coral Caves

Gamepad is recommended! (or the mobile gamepad overlay if the web version runs well on your phone!)

If you are on keyboard, use the arrow keys to move, and Z, C, or N as the "action" button (in-game prompts will show a 🅾️ symbol; this is a virtual PICO-8 controller button).

Aubrianne (the same Aubrianne who drew the cover art and who I am married to <3) wrote a 100% completely original poem which provides the deep lore behind this game:

'Twas the night before Christmas, when all through the sea
Not a creature was swimming, not you and not me;
The lights were all strung on the coral with care,
In hopes that St. Nicholas soon would be there;
The wee fry were nestled all snug in their beds;
While visions of sugar-worms danced in their heads;
When up from the surface there came such a splashing,
I sprang from my bed to see what could be happening.

Up, up to the top I swam like a flash,
Looked up through the ripples, popped up with a splash.
When what to my protruding eyes did appear,
But a crash-landed sleigh and eight whiplashed rein-deer,
With a little old driver so frantic and quick,
I knew in a moment he must be St. Nick.

They paddled like puppies, his coursers they came,
And he whistled, and shouted, and called them by name:
"Now, Dasher! now, Dancer! now Prancer and Vixen!
On, Comet! on, Cupid! on, Donner and Blitzen!
To the shore of the beach! to this lonely atoll!
Now swim on up! swim on up! swim on up all!"
As awkward as kittens dropped into a bath,
They bobbed and they flailed and sought for a path;

And then, in a twinkling, reindeer on the beach
Were prancing and pawing the sand with relief.
As I dipped 'neath the waves, and was turning around,
Into the water St. Nicholas came with a bound.
He was dressed all in fur, which was quite a blunder,
His clothes got all soaked and were pulling him under;
I was quite astonished to hear him call out
to me he was waving and said with a shout

"What ho, my good fish! You've been very good!
I'm here to bring gifts to your fine neighborhood!
But, alas! All the presents I brought for your friends
Have been lost at sea and I might get the bends.
Our tanks are all dented, and I very much fear
we have only wetsuits for seven reindeer.
Dasher, that rascal, lost his on that trip
we took to Fiji on our polar cruise ship.

"My friend, will you help me? I'm in dire straits
For all o'er the world empty stockings await
Will you find all the gifts and deliver each one?
Will you wear the red hat and make Christmas come?"
I solemnly blooped and I bubbled assent
I would see it through to the very last present!

His hand rose up all the way to his head
and came down again with his fine cap of red
He gave it to me and he said with a sigh,
"You're Santa now, fish. You are the guy!"
With a wink of his eye, he gave me a smile
I knew I had nothing to fear from this trial;
He sloshed to the beach, and tapped his red nose
The sleigh came together and in the air rose

He sprang right aboard, the reindeer all heartened,
And away they all flew, as fast as a marlin.
But I heard him exclaim, as I floated, awestruck—
“Happy Christmas to all, and to all, best of luck!”

this is the best christmas game ever!

this is really funny! love it ♥

This is honestly an adorable game, it has a lot of charm. It was very cute and clever, a game you really play with a smile on your face. The art is lovely as well! Thank you for such a dandy and fun game. Merry Christmas!

thank you very much for the kind words! merry xmas! :)

the humor in this was too powerful… i was cracking a smile the whole time. also, just gotta point this out, the way the end of the santa hat moved around when swimming was a really nice touch. i give this a 9/9, would become santa fish again another time (i tried to rhyme ok).

aw thank you so much! merry xmas :)

I got 9/9 coins now I can buy this coral

Hey i made a video about your game! (sorry for bad english)

Happy you enjoyed something in the video and  the game was really fun so was happy to share it.

Wonderful game all round! Got 7/9 coins, but the joy of the critters was reward enough :D

thank you! happy to hear that :)

Absolutely lovely game! Reached the end with 8/9 coins, and a smile on my face all along :). That cute tune was a perfect fit too, thanks kittenm4ster!

thank you for the kind words, ElGregos! :>

this is really cute!! Love the art style and the BG music! 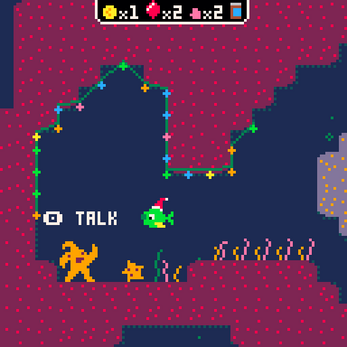 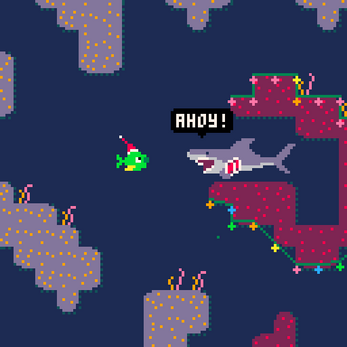 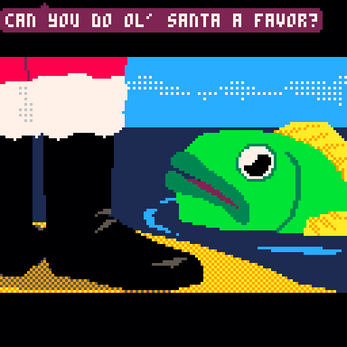